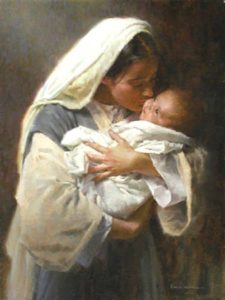 Growing up Lutheran, I enjoyed a number of advantages and learned a lot of good lessons. My Lutheranism was the laid back kind, not the pulpit thumping version. But one disadvantage of this background was never hearing the song Ave Maria in my growing up years.

My city of Amery, heavily Protestant, had one Catholic church. Located on the other side of town from the Lutherans and Baptists, I knew Catholics and schooled with Catholics, but the advice from my earliest days–“Don’t marry a Catholic.”

This softened as time went on, I eventually married a Catholic from the Bloomer area, and we’ve gotten along well.

But, the song Ave Maria to me is one of the most beautiful and haunting songs I’ve ever listened to. Even the instrumental or foreign language version resonates with me, and it might not be so much the tribute to Mary as the tribute to motherhood. Looking at the painting at the top of this page, it could be Mother Mary and the baby Jesus, or it could be a loving mother with her recently born child.

I’ve said that partly in jest, but actually mean it when I say the disadvantage of growing up Lutheran is not hearing that wonderful hymn. In our church and among Lutherans, they praised and lauded Mary at Christmas, but during the rest of the year little was spoken about her. The belief as it was told to me at age 10 or after is that Mary is a wonderful human being but she isn’t a saint and isn’t going to intercede in answering prayers.

Ave Maria, maiden mild
Oh, listen to a maiden’s prayer
For thou canst hear amid the wild
‘Tis thou, ’tis thou canst save amid, despair

Seeing these for the first time, I guess I wasn’t aware of the lyrics. Anyway, these are all my reflections, and for Protestants, we can look at Mary as an ideal mother even if we don’t think of her as being divine.

5 Replies to “Ave Maria: I Never Heard It”