Crackers meant one of two events was happening: illness or soup was served. The crackers that came with soup in a restaurant were great snacks before the regular meal  arrived It also provided sustenance in the case of stomach flu and other illnesses when the stomach was queasy. And great for pregnant women in times of queasiness.

The variety of crackers today  means a person doesn’t just have to eat those tasteless wafers. And growing up a cracker with peanut butter was a wonderful snack, mid-afternoon or late evening. Cheese and crackers with a glass of milk laid the groundwork for a good night’s sleep.

Searching for the background and history of the cracker barrel, non-capitalized, proved fruitless. I’ll continue, but my limited understanding is that general stores had cracker barrels to snack from or to pull out a handful, weigh them, pay for them, and take them home. All I found on Google was the Cracker Barrel store. As soon as I hit paydirt and find more about these store barrels, I’ll add it here.

From Wikapedia I found a couple facts about cracker basics. This amplified what I had known:

As a home remedy, saltines are consumed by many people in order to ease nausea and to settle an upset stomach. Pregnant women are also usually advised to snack on saltines. 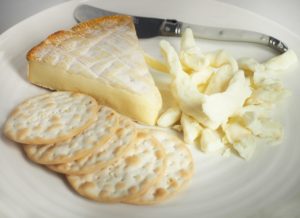 And as far as crackers vs. hard tack, there’s this:

Baking process. Saltines have been compared to hardtack, a simple unleavened cracker or biscuit made from flour, water, and sometimes salt. However, unlike hardtack, saltines include yeast as one of their ingredients. Soda crackers are a leavened bread that is allowed to rise for twenty to thirty hours.

My mom often told me how her father, Ole Larson from Norway, sailed for a living and also came to the US from Norway with a friend in the 1880s. He told Mom and the family about eating hardtack as sustenance.

The cracker. Sorry if this is all over the place, but I wanted to put together some bits of information on this common snack and sidekick for any kind of soup. 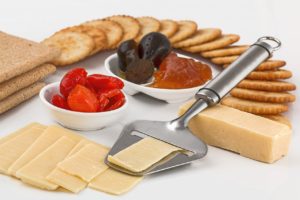 2 Replies to “The Basic Soda Cracker”