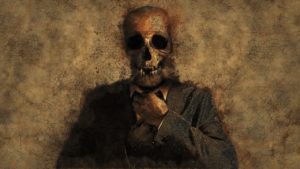 We found him between the silos.

Visiting Grandma on a hot summer day, my Cousin Brad and I found the hired man, dead. His body was covered by tarps and scrap wood, and we didn’t know who else knew what we just found.

Every summer for a few days, Brad and I spent a few days and special nights at the Elkin home farm. Grandpa Nels died 40 years earlier, but Grandma Ovidia liked to have us around in mid-summer.

Such a special time full of promise, adventure, new sights and smells, and a time to relax a little and just be boys. When we could we helped Grandma, hanging clothes and carrying water when she washed clothes, and washing dishes at the end of each meal.

After lunch on a hot and steamy early August day, we carried out our aluminum glasses with ice and Kool Aid to find a spot somewhere in the shade. Between the silos looked like the best spot, and we sat with a view of the farm buildings, mostly the pig shed. Low grunts came from the low building, with occasional squeals.

We talked girls, parents, Grandma, school, and for a time simply sat in silence.

Brad reached down and his hand rubbed on a hard surface. Looking down, he yelped and made desperations noises. His hand touched the skeletal bones of a human hand.

“What is that!!!” He stood and I stood and we saw the hand sticking from the pile of rubble between the silos.

Little by little we took off the canvas and scrap wood, talking about nothing that I remember, but also not wanting to uncover it too quickly. We had no idea what lay under there.

The last board off and dirt exposed, but the dirt contained white bones and a jacket as the photo above shows. On his right hand was a silver ring on a middle finger. I knew that ring, I gave that ring to Leon the hired man a year ago on his birthday. The ring was a 7th grade art project.

“Their hired man,” is said and then said no more.

We weren’t sure who we should tell about this, but I had a feeling deep down that my grandma and uncles on this home farm already knew. 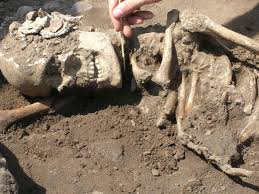