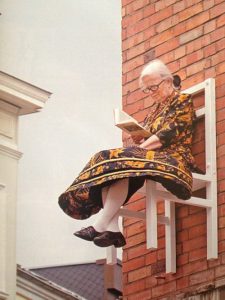 Miss Schider was a character who kept student attention and focus, and, shown here, supervised the playground from 20 feet up. On her days, she’d climb out the windwo of her classroom, ease herself onto the chair, and evil eye the playground (she called it a battleground). Her high pitched voice carried 75 yards, but even more immediate was her pea shooter. Near deadly accuracy. The misbehaving kids didn’t know what hit them, but they stopped whatever they were doing. The kept thinking it was a bee sting.

Not sure how she came to Amery to teach, but she commuted from Stillwater every day. One of her students told me the literature she kept on her desk had the words socialist and survivalist. We had no idea what they meant, and the dictionary did help us.

Miss Schider and the French Revolution

One December day before Christmas she talked to her kids about early French society, the Revolution around 1800, and why it happened. She pulled out a mock-up of a guillotine, told them about it, made sure the kids realized that the aristocracy to be executed were not nice people, and she’d demonstrate. She placed a thick carrot in the apparatus. Schick, down it dropped, two carrot pieces.

Earlier she asked the girls to bring a doll, an unwanted one that might be ready for the trash. Cindy brought a old, dirty doll that looked like someone had dragged it behind a car. Cindy brought it to her then sat back in her seat. 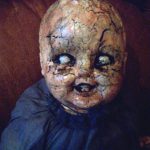 Miss Schider first addressed the doll as if it could hear, telling her that money and jewels won’t save them and “You Princess have reached the end of the line.” The guillotine was placed so the head would fall into the waste basket. Placing the doll in the right position, she asked if this enemy of the people had anything to say. Nothing. Releasing the blade, it slid with a scratchy and metallic sound, lopping off the doll’s head. Unknown to the kids, Miss S placed a plastic vial of red paint by the blade so when the doll’s head came apart from the body, red liquid splattered down the desk and into the wastebasket. Gasps but no snickers, and wide eyes.

The kids, no doubt about it, had the French Revolution fixed in their minds. And no daydreaming during that performance.

With that over, she placed the killing machine behind her desk. “Now take out your math assignments and turn to page 144, kids.”

Below, statue Miss S kept on her desk for the rest of the year with the title, French Revolution at the bottom. 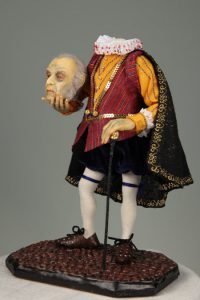 2 Replies to “A Most Bizarre Elementary Teacher–Updated”