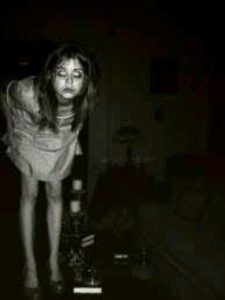 In 1960 we dedicated campers spent several nights each summer sleeping in tents and camping to get away from it all. One time we camped at the end of a pasture near our house west of Amery, and it turned out to be Pike Lake, one of the lakes around Amery,WI. Terry and Terry and Kenrad and me, the camper club.

We stayed for two nights, fishing and hiking, eating beans from a can and frying eggs and weiners. The first night we heard something or some life form outside our tent. We were in a pasture, so we chalked it up to heifers sniffing around, and it rained hard that night. The next morning we looked around the tents, not finding any cattle hoofs but we did see a set of narrow, odd bare human feet.

Kenrad went home during the day and brought back a new device his dad had just got in the mail. It was what we now call a game camera, and we set it back from the tents so any movement would trigger the shutter. The image would be captured on black and white film.

The next morning we got up, saw more fresh footprints like the day before, and the camera showed a dozen pictures snapped. We didn’t notice the flash throughout the night, but that’s not unusual.

When we had the film roll developed at Danielson’s Drug Store in Amery, we got a lot of nothing but we did capture this image. We each got a copy of the picture, but we didn’t want to show it around because our parents wouldn’t let us go camping again.