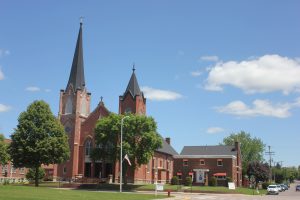 The boys enjoyed the summer in the  Bloomer Catholic church belfry, and now there are three sleeping up there. Parker, his friend Wally, and Parker’s brother Greyson. They didn’t want to take him but Parker’s mother Dana talked him into it, giving her more time to drive the Bloomer back roads and look for garage sales. More on her later.

(Under the Search function on the blog opening page, write in Bloomer or belfry to find past posts about them.)

Getting cooler in the tower as summer goes on, but they’ve got plenty of blankets to stay comfortable. Greyson’s a couple years younger than Parker, and Wally keeps Parker from picking on him. Wally reminds older brother that he’s just a kid, and besides, “He can go down the steps and get things that we accidentally drop.”

They checked off several items on their todo list, written in May before school let out. On midnight of the 4th of July, they figured out a way to ring the church bell for all of Bloomer to hear. Only once, they figured, because any more an it would raise suspicions.

The boys save a local damsel in distress

The other event they took pride in was stopping a drunk guy from acting nasty to his girlfriend/ maybe wife. The couple came down Main Street toward them, and he played rough with her. No matter how much she told him to stop, he kept it up. Time for the pea shooters.

Parker and Wally have industrial sized pea shooters; Greyson didn’t  have one yet, he was too short to look out the louvered openings. The two foot straws with small buckshot could land the “pea” 30 yards away. When the macho fellow kept pestering his femalepartner, the boys yelled, “Now”. That meant both at once, and the man yelled as he felt a sting on his butt and the back of his neck. Like a dog in it’s first rainstorm, he couldn’t figure it out. They shot a couple more times just for good measure, and he forgot about treating his girlfriend like trash.

And the bats above them? They’re accustomed to the noise from the boys, almost enjoying it though we can’t tell how bats enjoy anything.

Dana their mother will be featured as well in an upcoming post, the want-to-be artist who thinks that looking through items at rummage sales will make her wealthy when she hits the jackpot: an original black velvet Elvis or a mountain scene from that Ross painter with the Afro hairdo.

The next segment of the Boys in the Belfry will lay out their study of the bats above them in the belfry. For now, that’s all I have to report.