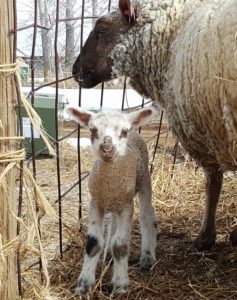 From a modern sheep herder: “People think I’m crazy, but I don’t care.”
April can be a busy month for raising sheep because of the birthing and follow-up care needed. Brenda from western Wisconsin says, however, “I love it.”
Her worst experience? She sold a lamb to a person who let it starve. Since then she either doesn’t sell to others or closely monitors the transaction.
More about her will appear in an article I intend to submit to a country/ ag paper, The Country Today out of Eau Claire, WI. But for this writing I’d like to include Brenda’s reflections as laid out at the end of a day earlier this month.
Below? Pure Brenda
Two more new lambs this morning!!! Not the ewe that I had been watching so closely (of course), but another that was close to her due date as well. The lambs are a little on the large size for a first time mom, and it looks like it might have been a little rough getting the second one out. The second lamb, a little girl, had a good amount of yellow meconium on her, her umbilical cord still overly thick and bloody. Plus her back legs were weak like she had been crammed in there for awhile. Also, I think the mom paid too much attention to the first lamb and the second one was getting cold. She had them outside, away from the shelter, but it was still a good protected spot.
This mother was a skittish one, so I couldn’t take the time to wrangle her and get the second lamb to nurse asap. I just brought the droopy little lamb into the house, dried her off, tied off and dipped the umbilical cord, and fed her warm colostrum right away. She’s already perked up, and those back legs are now limbered up and strong. She’s hanging out with the other 3 bottle babies that I had riding around in my truck last week.
The first born boy lamb has nursed, napped, is dry, and inside the shelter now with his mom. I think for how cold it is outside, the mother should probably have just have one to keep track of. These babies are too valuable to my breeding program to take a chance on losing one.
There’s another pregnant ewe whose udder just swelled up plump overnight, so I expect her to lamb tonight. And it’s still not the one I had been watching……lol.
The trials and tribulations of a modern shepherd, nearly al of them victories. No time to get bored, and during lambing time she makes do with an erratic sleep schedule. 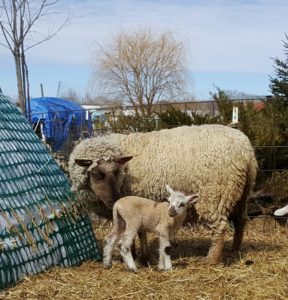