Hanging clothes on a clothesline. Simple, yes. Not always. Rules in each neighborhood and cultural region meant hanging had dos and don’ts. For us living in the country, it wasn’t so rigorous and rigid because neighbors were far away.

First of all, one reference to hanging clothes and items son the lines came from Garrison Keillor when he described spring out in the country around Lake Wobegon. The Norwegian bachelor farmers washed their sheets once a year, whether they needed to be washed or not, and hung them out on the first decently warm day. So from the rural roads a person could see these yellowish, even brown pieces of cloth waving in the breeze. And that night, you could imagine, their uncomfortable feeling of sleeping on clean sheeting.

Here are some of the rules

The rules appeared on a post on the internet, and Lynette H. passed them to me—4 years ago. I’m glad I saved them.

Whites hang with whites, and so you know what coloreds do. The outside edge of the clothesline area is guarded by towels. Towels on the outside to protect prying eyes from spotting undergarments somewhere in the inner circle.

Wash day is Monday unless a holiday falls on that day, and no washing / hanging on Sunday. No clothes pins should be left on the line because that indicates trashiness. Another sign of trashy and tacky? Clothes on the line overnight.

Ideally the clothes are taken down that afternoon and folded, ready for ironing. Ironing? Another topic, another day.

As I hinted above, these rules were more rigidly expected in urban and city neighborhoods. We enjoyed a little more freedom in the country, a den of “hang ‘em anywhere” for the most part.

A clothes line was a news forecast,
to neighbours passing by.
There were no secrets you could keep,
when clothes were hung to dry.

It also was a friendly link,
for neighbours always knew,
If company had stopped on by,
to spend a night or two.

For then you’d see the fancy sheets
and towels upon the line;
You’d see the company tablecloths,
with intricate design.

The line announced a baby’s birth,
to folks who lived inside,
As brand new infant clothes,
were hung so carefully with pride.

The ages of the children,
could so readily be known
By watching how the sizes changed,
you’d know how much they’d grown.

It also told when illness struck,
as extra sheets were hung;
Then night-clothes, and a bathrobe too,
haphazardly were strung.

It said “Gone on vacation now”,
when lines hung limp and bare.
It told “We’re back!” when full lines sagged,
with not an inch to spare.

New folks in town were scorned upon,
if washing was dingy grey,
As neighbours raised their brows,
and looked disgustedly away.

But clotheslines now are of the past,
for dryers make work less,
Now what goes on inside a home,
is anybodies guess.

I really miss that way of life;
it was a friendly sign,
When neighbours knew each other best,
by what was on the line.

And down here where many won’t notice, — 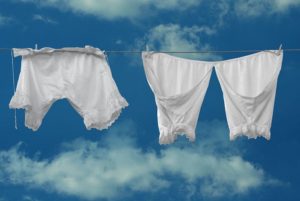 3 Replies to “Clotheslines: Rules, Social Norms, and a Poem”