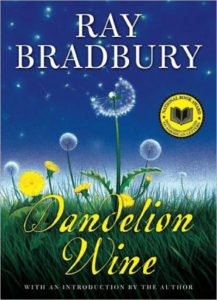 The book Dandelion Wine caught my attention because of the descriptions of growing up in a small community, seen through the eyes of a 12-year-old boy. The variety of opportunities and choices mirrored my life in the area east and west of Amery, Wisconsin. I’ll present parts of the first chapter in which Douglas woke up on the verge of those endless days of warmth.

It was a quiet morning, the town covered over with darkness and at ease in bed. Summer gathered in the weather, the wind had the proper touch, the breathing of the world was long and warm and slow. You had only to rise, lean from your window, and know that this indeed was the first real time of freedom and living, this was the first morning of summer.

Douglas Spaulding, twelve, freshly wakened, let summer idle him on its early-morning stream. Lying in his third-story cupola bedroom, he felt the tall power it gave him, riding high in the June wind, the grandest tower in town. At night, when the trees washed together, he flashed his gaze like a beacon from this lighthouse in all directions over swarming seas of elm and oak and maple.
A whole summer ahead to cross off the calendar, day by day. Like the goddess Siva in the travel books, he saw his hands jump everywhere, pluck sour apples, peaches, and midnight plums. He would be clothed in trees and bushes and rivers. He would freeze, gladly, in the hoar-frosted icehouse door. He would bake, happily, with ten thousand chickens in Grandma’s kitchen. But now–a familiar task awaited him. One night each week he was allowed to leave his father, his mother, and his younger brother Tom asleep in their small house next door and run here, up the dark spiral stairs to his grandparents’ cupola, and in this sorcerer’s tower sleep with thunders and visions, to wake before the crystal jingle of milk bottles and perform his ritual magic. He stood at the open window in the dark, took a deep breath and exhaled. The street light, like candles on a black cake, went out. He exhaled again and again and the stars began to vanish. Douglas smiled. He pointed a finger. There, and there.

“Everyone up.” The great house stirred below. “Grandpa, get your teeth from the water glass!” He waited a decent interval. “Grandma and Great-grandma, fry hot cakes!” The warm scent of fried batter rose in the drafty halls to stir the boarders, the aunts, the uncles, the visiting cousins, in their rooms.
Clock alarms tinkled faintly. The courthouse clock boomed. Birds leaped from trees like a net thrown by his hand, singing. Douglas, conducting an orchestra, pointed to the eastern sky. The sun began to rise. He folded his arms and smiled a magician’s smile. Yes, sir, he thought, everyone jumps, everyone runs when I yell. It’ll be a fine season. He gave the town a last snap of his fingers. Doors slammed open; people stepped out. Summer 1928 began. 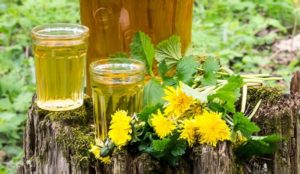