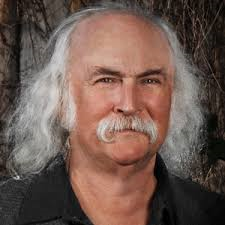 When I saw the music legend checking out customers at a cash register, I couldn’t believe that David Crosby had come to this. Without talking to him, I studied his movements and his interactions with customers. It was him, it had to be.

And like the numbskull I am, I forgot to take a picture of him. The next day I stopped to see if “Rick” was working, and I found out he didn’t start until that afternoon. Figured out that “Rick” was short for Richard, Crosby’s middle name I’m sure.

Before I checked out, I took the other clerk, Kim, aside and asked her if she knows who that really is, pointing at Rick. She looked confused and asked me who it was.

“You mean the black comedian who’s on trial? That can’t be him.”

“No, that’s Bill Cosby. This is Crosby of Crosby/ Stills/ Nash/ and Young.”

She looked confused. When I checked out, I looked right at him and told him I know who he is.

He winked, said he gets that all the time. He’s most proud of putting on a Santa hat and entertaining his granddaughter as Santa.

He talked about his writing about Santa and has worked up a few stories. I gave him my card and I hope he stays in touch.

Full disclosure: about 40% of this might be true. I’ll keep you up to date when he sends stories. Must be sick of singing so he’s taken on a more relaxing line of work. Maybe he sings Karaoke in the Burlington area.