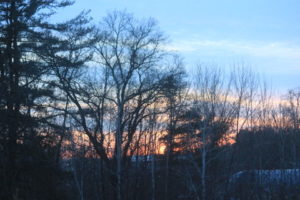 Two miles east of Amery, 3/4 mile from Karen Strohbeen’s farm, the area called Lutefisk Woods held mystery and a great deal of uncertainty. The name was rumored to start because early Norwegian settlers in that area of Polk County one December received so much lutefisk that they couldn’t eat and handle it all. A couple of adventurous Noske farmers disposed of the lutefisk in that area on the north side of the road, now J, and thought that would be the end of it. For that winter, which was warmer than usual, and into the spring, people driving by that area smelled lutefisk in an awful state of decay. Evidence of poisoning bears and other meat eating rodents made the rounds of the family get-togethers, but that sealed it. Lutefisk Woods.