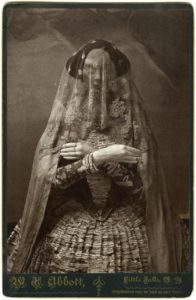 My aunt’s perfume I remember. On a trip to Norway, relatives wore that same fragrance. Aunt Beulah spent time in Norway during the 2nd World War.

Family reunions at Mom’s home farm in summer attracted the Larson relatives once a year. Aunt Beulah and others congregated at the farm north of Amery, WI, for an afternoon of catching up.

Some of Mom’s siblings moved to the Cities in the 1920s, but Mom and her brother Lawrence stayed on the farm and in the county. Oh, yeah. Black sheep Art stuck around the farm.

In July, Uncle Leonard brought Aunt Beulah and others to the farm, and once there, made sure she got into the house and seated at in comfort. The younger cousins saw her, appearing like the photo above, and weren’t sure about this lady.

My aunt looked around, taking everything in, but only gave short answers to people talking to her. “Ya” and “nei” were most common, or at times a shake of her head and a little smile.

In the kitchen, Mom said, “Here Loren, bring your aunt this plate of food.” I froze but did as I was asked, and when I sat close to her, and I handed her the plate, afork,  and a spoon. In a quiet voice she asked for a napkin.

She ate bird-like, but in an hour had the plate cleaned. I tried my best at small talk with little success. Here’s where I smelled that delicious perfume, light and delicate coming from her entire body. All I could think of was wildflowers and a campfire, that aroma so memorable.

Mom told me that Aunt Beulah kept up her Norwegian language skills that she heard and learned in the Larson farmhouse. Her father Ole Larson and mother Julia Larson came from the fatherland 20 years earlier. It wasn’t clear how much either learned to speak English, but the Larson siblings shed the language like a disposing of a dirty pair of socks.

On a summer Saturday I traveled to Minneapolis with Mom and sister Leora, staying overnight with Aunt Beulah. Cramped apartment but she proudly showed us the rooms and a great view of the Mississippi a quarter mile away.

We worked in the soup kitchen she oversaw, and afterward ate in the dining room with the people from the streets that show up daily. Many called my aunt a saint and told me how she treated them in love. In another section on another floor were pregnant young girls, but she couldn’t show us that part.

Aunt Beulah found time to volunteer at the Norwegian Lutheran Memorial Church not far away, called Mindekirken, where she read scripture in Norske on Sundays and sometimes taught a class to adults who wanted to learn Norwegian.

Leora and I laughed when she burst into her childhood language in speaking to the street people, but Mom just smiled. She also grew up with that but didn’t hang onto it.

As war hit Norway in the early 1940s, Aunt Beulah in contact with Larson relatives in and near Bergen accepted the challenge to help in Norway. In and around Bergen she worked with refugees and the resistance, and later I found she helped Norwegians escape to Britain.

A few stories in letters, often good news, made it back to the Cities and Amery, but this bubbly and brave woman returned in 1946. She had changed, now a shell of her early self.

Mom heard the rumor that Germans captured her, holding her in confinement for several months. Only Beulah knew what went on, and she wasn’t talking. She became a near mute.

In 1946 she arrived in Minneapolis on the train. She only brought back a small suitcase and something else, more precious. On her hip she held a little year-old boy. Little Jakob. Aunt Beulah smiled when taking care of him, someone she could love and keep her busy. Several of my Larson aunts and uncles took care of her for the rest of her life in the Twin Cities.

Jakob turned out fine, later becoming a history professor at the University of Minnesota. He only came out once to the Larson farm in the summer but later fading away.

It became a fine memory to me, sitting next to her at the family get-together, talking about what I was doing in my life, and her occasional “Ya” with a head nod. Her perfume and stoicism became locked in my mind, a special relative. I’d look over and through the veil to try to read what she wrote on a small pad, but it was small writing and I’m guessing in Norwegian.

My hope was for a book to come out, Jakob controlling her belongings and papers during he later years and after her death. Nothing yet.

Aunt Beulah died in January, 1988, after a decent Christmas with a few Larsons. As a teacher, I couldn’t get off to attend her funeral.

Mom didn’t say much about her after that, despite questions I asked in quiet times. Just a word now and then and a rare, occasional tear.

My dad often kidded about giving Leora and me something, the 2nd Tuesday of next week. Elements of this story are true, but for the most part it’s as real as there being 2 Tuesdays next week. I enjoyed putting this story together.