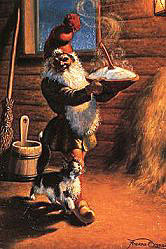 The kids stared at their aunt. Marianne froze for a few seconds.

She positioned herself to reach through the slats to pick up the baby. She unwrapped her, unswaddled her by unwinding the cloth.

Marianne knew to hold her upright, facing the nisse family, and reached around the baby so her fingers met at the bottom of her rib cage. Even that little movement brought a second of relief.

Marianne pressed in with her fingers, trying for pressure to push at the baby’s lungs. On the 3rd try the baby gagged, vomited fish and a small bone, and took a breath. Marianne cried without realizing it, the pressure on her now over.

The nisse mother reached to grab the baby, and in that moment, that second, touched the hand of Marianne. She re-swaddled him.

The nisse cheered and raised their glasses.

Backing down the middle of the barn between the cattle, they couldn’t take their eyes from the scene and the light of the party.

The oldest nisse walked around the hiding gate, even a bit of a run, and gave something to Emma. “Give this to the big lady.”

“For good luck,” he told Marianne.

He handed over a fancy carved wooden spoon.

After getting the kids situated in bed and answering questions, Marianne lay in her bed. Unable to sleep, she held the spoon. “Someday I’ll have to tell this story to someone.” 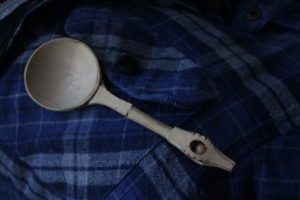 2 Replies to “Emergency in the Barn; Nisse Story Concludes”