The annual Fall Festival today, the 16th day of September. Lovely day, hinting of rain last night but it didn’t materialize. Warm, even hot at times, and breezy which felt pretty good but blew items around. The lineup began around 9 or 9:30 on the north end of Amery, up the side streets and back to North Park. Highway 46 was diverted for the time the parade took to get done, and by that time the food stands and rides area was going steady and heavy. Lots of browsing in the large crafts section, but didn’t see a lot of buying. Many meet-ups of old friends and relatives in that area. Walked to the food section and it was packed. I’m getting ahead of myself.

The parade. Starting promptly at 10:30 after MC Bill Hegg arranged and got the Queen and her Princesses from last year to sing the national anthem. Lots of pride, and soon the festivities began. Candy right off the bat, and the parade of fire and emergency equipment took awhile to move through. Besides Amery the truck from Osceola, Apple River Township, and Clear Lake became part of the entourage. The variety of Amery emergency vehicles included their newly acquired air boat, able to move quickly through water and I’m guessing over ice and thin ice. 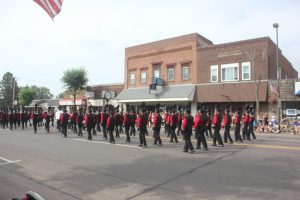 The Amery Band did a nice job, the Clear Lake and cadet band did well also. From Elk Mound, their band put on quite a show. Lots of members, lots of intro people at the beginning with flags and the city/ school banner, and 3 characters dressed, well it was a Star Wars theme so the music reflected that. Queen candidates from Amery appeared one at a time, but the queens and their support group from the Polk County Fair, Clear Lake, and other communities added color and beauty. Hudson was another one I just recalled. So then the tractors captured everyone’s attention, mostly Allis Chalmers but many others as well. Al Johnson is the main man in this area, his tractors are featured and I’m guessing so are others. No women, except toward the end a lady was on the little Ford tractor that was so common, often used only for wagon pulling or single bottom plowing. 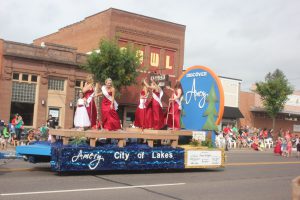 The Cub and Boy Scouts marched proudly, not a lot of business floats or trucks that I remember, and a few other random entries. The Zor Funsters were the big men on go-carts, wheeling around in intricate patterns, and they would calm down and get into formation. Then, wham, they’d move in their weaving and quick movements. They appeared to enjoy it as much as the crowds did. The viewers weren’t that thick along Keller near the downtown, but next to and across from the announcing wagon featuring a sincere Bill Hegg, at those points the people were two and three deep. The chairs started appearing near the old railroad tracks are, appeared on Thursday or before. The announcements from Bill helped understand what group moved through and his words made the people involved in that float or band or entry, it made them feel appreciated. A welcome to the Fall Festival Parade and a “glad you’re here”. The end of the parade was the horse group, not sure how many, but they were often the last in the past. And the poor looking man with the scoop shovel and the wheelbarrow, what a job. No, really, he didn’t look so sad. He knew there was a job to do and he was going to do it. Besides, maybe he got down to the end of the parade near the hotel and onto old Soldiers Field and he put a price tag on it, $5, you haul. 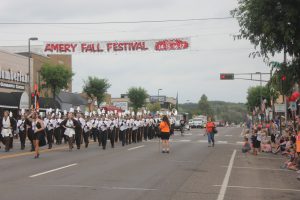 Parade’s Over, Let’s Eat and Browse the Crafts

As stated above, dozens of craft choices, a few wood products, some cosmetics and food items, and all were under a tent of some sort. That would mostly hold out the rain, but on this day they were shade, welcome shade. The rides were just south of the craft area, but I didn’t get into it. Lots of good sized rides, and a few food stands I’m guessing. They set up last Wednesday I believe and were operating by Thursday evening and for sure on Friday eve.
In the food section, a number of groups including Scouts, the Wrestling Club, the Hockey organization and parents, several churches, the Lions, and the bleu cheese burgers at the Joel Homemakers stand. This year I broke down and had two of them, but nothing else in that area. This year I have to proudly declare that I did not buy any little doughnuts, often a delicacy that I associate with fairs and times like this. The Fall Festival food choices offered something for every taste.
The crowds in this area cleared out by 3:00, some stands packing up as soon as their product ran out. Going back to Keller, I walked to the Farm Table restaurant and eating area. Today they had a single specialty. It was a brat or pulled pork sandwich, cole slaw or potato salad, a cob of sweet corn, and something else I’m leaving out. Not hungry enough for that, I ordered a brat and a specialty beer, Transmission? I’ll find the real name. The beers they offered were unusual brands, nothing predictable, which offered a good choice to those who aren’t picky or snobbish about their beer drinking. At that place I met a lady who has a farm out F on the way to Clear Lake, the wife of David Toftness the Chiropractor. We talked, we exchanged cards, and I told her about the story I just wrote about an event in my early years involving the creek/ brook that went by our house, Bull Brook. The name of her farm? Bull Brook Farm, down from my spot and raising a special breed of cattle. Looking like Belted Galways, they are different, and grass fed only. Will go there tomorrow and snap a few photos. Otherwise I’ve got photos posted on Facebook, my blog, and on my Elkfarm email. Contact me if you’d like to see them and get on the email list. elkfarm@wctc.net   to contact me

4 Replies to “Fall Festival is Over, Summary of the Day (Long Post)”