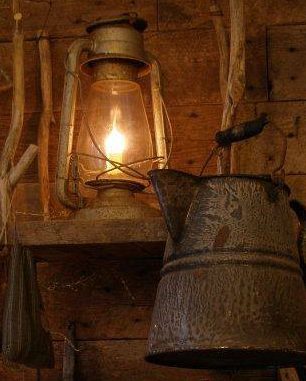 Meals with Freya were like none anyone could ever imagine. She often caught enough chubs from the brook to make herself a couple meals each day, and the bullheads I brought often lasted a day or two as well.

In an iron pot behind her shack she’d heat up the chubs, sometimes with turtle meat, and boil it until it created a rich gumbo, garnished with natural herbs from the fenceline by the hayfield and by small bottles of herbs that I gave her, “borrowed” from our kitchen back home. Sometimes she’d eat right out of the pot and at other times she scooped the fish stew into an iron bowl. She had a bowl for me, and I got used to eating that unique brook concoction.

The oil lantern, above, hanging inside her stone haven became her comfort and even warmth on chilly evenings. She never told me where she got the fuel oil, but farmers between the brook and Hwy F between Amery and Clear Lake may have sold or given her enough to keep her going.

A small, heavy iron Franklin stove warmed the place in winter, and she stayed active gathering wood from the valley.

In any season for several years, throughout my high school years, I stayed in touch with Freya. Ideas for writing in high school came in part from my contacts with her, and the more I learned about her the less I felt I knew her.

During my college years I lost touch, and over Easter break of my senior year I walked down the valley to check on her. The empty shanty surprised and saddened me, little left except that iron cooking pot new her comfort lantern. Someone had removed the Franklin stove. The pot was too heavy to bring back to our house, but I kept the lantern. It’s still with me, in my garage, and though it’s not working now, it’s a keepsake. A reminder of a strange episode of my early years near Amery. 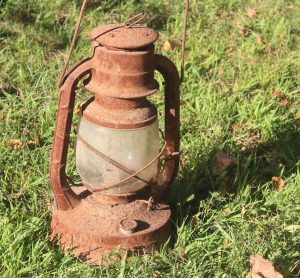 One Reply to “Final Thoughts for Now About Freya”