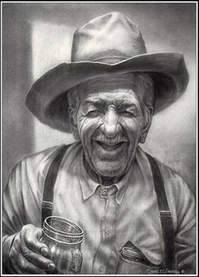 The man had a good, full life but he never a birthday party, he just didn’t. A loner, a smart man, a storyman, and even a moonshiner.

Simon Carlson worked in the Amery City Hall, engineer I believe or head of streets and sewers (let me check on that) who enjoyed his job, worked well with the public, and attended community events.

“He lived in that cable car on the road going out to the dump,” Dad told me when we saw him walking on Keller Avenue, main street. Dad pointed out the cable car on our way back from the dump one Saturday morning. Later I worked for the city under his office in the summer, with my cousin Brad, and got to know him and his lifestyle.

He’d make moonshine out in his cable car lot, a heavily wooded area where a fire and copper instruments couldn’t be seen from the street. He distilled about a gallon a month, slowly dripping the alcohol into the finishing metal gallon can. Once he let Brad and me try a juice glass of it, but it stung all the way down. The 2nd glass wasn’t so bad, but that was enough for me. Brad barely finished his. 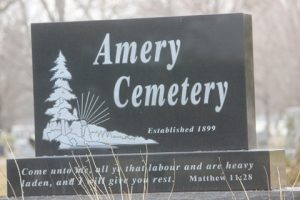 Police often noticed him walking among the headstones at the Amery Cemetery, and residents in that area noticed him strolling and talking to no one they could see. He’d have a quart jar of his corn blend, and he brought a small flashlight with him to get a closer look at the old gravestone printing. Mornings in the summer he’d be out there as well, but no nature’s mountain dew at that time of the day.

When I went away to college, I received a note from a couple of co-workers at City Hall that they intended to throw a birthday party for him later in the day on Thanksgiving. The Congregational Church most years provided a community meal to anyone who happened to be alone or who couldn’t cook for themselves. Simon was always at these events, dishing out mashed potatoes and later relaxing, sitting down exhausting and scarfing down the turkey and trimmings.

Little did he know that later in the day, after the dishes were washed and put away, that he’d be the center of attention. Someone once heard that he’d never had a birthday party. That streak would be broken.

Former co-workers and as many friends as could be rounded up came to the Congregational dining room, bringing presents and in one large box, a luscious cake of lemon poppyseed, his favorite. On top, the words Happy Birthday Simon, then below it in large wax letters, standing up, a 6 and an 8. His 68th birthday.

His mouth open, his eyes almost as large, and tears started down his cheeks. The crowd couldn’t be distracted, or they wanted to distract him by singing the Happy Birthday song. “Happy birthday to Simon, happy birthday to you.” Not a dry eye anywhere.

Simon sobbed, unable to speak. They sang it once more and let him compose himself. The joy of a birthday party for the hermit living in the cable car. A day he never forgot.

7 Replies to “First Birthday Party at a Ripe Old Age”