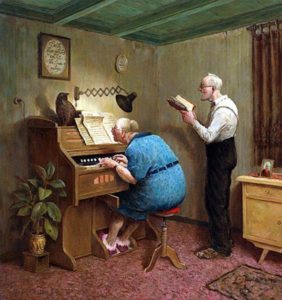 Singing at Easter. Above, Henry and Gladys Armitage prepare for the service tomorrow at Our Savior’s Lutheran in Amery. For the last 15 years Henry has sung the Old Rugged Cross on Easter Sunday. (At Christmas, his special song is “O, Holy Night”). They’re cramming on this evening, not having worked on the song as much as they should have in March, but it’s coming along. She’s having more trouble with their pump organ, but at the church tomorrow she’ll be playing a grand master of an organ.
The next day they arrive at church half hour before the 9:00 service so Gladys can play a few lines of the song. Soon the top notch church organist Sharlene steps near them, ready to play the prelude service prelude.
Ten minutes into the Easter celebration, Henry and Gladys move slowly to the organ on the left side of the congregation. Henry does a little vocalization, then he joins Gladys’ who is already playing. “On a hill far away stood an old rugged cross, the emblem of suffering and shame.” He sings slowly, deliberately, and Gladys know exactly what speed to play. Sometimes he’s almost speaking the words, but the crowd knows he does this because he means it so deeply. “And I love that old cross, where the dearest and best, for a world of lost sinners was slain.”
He sings 3 more verses. There’s a little weeping in the pews., partly because he’s good, because it’s such a wonderful tradition, because this song brings out so many memories of this springtime event.
Henry finishes. Gladys gathers her music and maneuvers out from the organ, not looking toward Henry. She knows him, he’ll be right behind her. But he’s not.
He waits until she sits. “This Easter song was my mother’s favorite.” He stands with the microphone in his same spot, and Gladys looks back in confusion.
With a tear and a strong surge of singing, he begins, slowly and, again, so deliberately.
“I come to the garden alone, while the dew is still on the roses.” Both Henry and most of the congregation can picture a person walking into a Wisconsin garden at sunrise.
“And the voice I hear falling on my ear, the son of God discloses.” And he sings the chorus and two more verses.
“He walks with me, and he talks with me, and he tells me I am his own.” Pause, he looks out to the members. “And the joy we share as we tarry there, none other has ever known.”
More verses.
His eyes streaming as he wipes them with his shirt sleeve, thinking of the farm of his parents and an Easter springtime. He finishes, sets the microphone near Sharlene at the organ, and slowly walks to the pew.
Pastor Evavold waits for a minute or two, letting it all sink in. Henry sobs, memories vivid.
Only God knows that this would be his last singing at Our Savior’s. For years after, the name of Henry and Gladys Armitage brought smiles to these members. 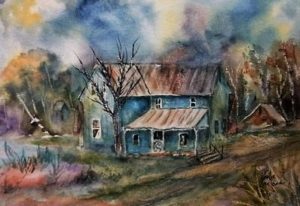