The lobby of a church, a Sunday ceremony for the installation of a new pastor. The air filled with an excited murmur, the punch and cheese trays magnificent. By now most had drifted into the sanctuary, but a few hungry stragglers remained. That meant more cheese and crackers for me and not having to jostle others for the goodies.
The center of the cheese tray, as was common here and in other places, held a small wedge of Gouda cheese with the red wax still on it.
The cheese guard stood ready to assist and answer questions, and as I speared one Gouda and went for another, I tried to make conversation.
“Is that a local thing to have Gouda in the middle of a cheese tray, one piece of Gouda?”
He looked at me and affirmed what I said, “Yes, that’s Gouda in the middle.”
Wanting to restate my question, I asked him if Gouda in the middle is just something they do at the Rudolph cheese store.
“Yes,” he told me. “These cheese trays are from Rudolph.” 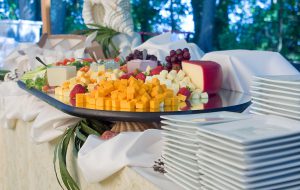 Almost losing my patience, I asked him a little more clearly: “Is it common to place Gouda in the middle of a cheese tray in other places where they make cheese trays?”
He had to have heard me on that one. But, no.
“I think Gouda was originally made in the Netherlands. It’s a Dutch cheese, I’m pretty sure.”
Ready to give up, but distracted by stabbing the 3rd chunk of Gouda cheese, I told him with a smile, in my friendliest Dutch accent:
“Ik heb het gevoel dat u was in uw oren, een heleboel kaarsvet.”
Pausing for a second or two, he figured I had to have said something positive and friendly, so he responded: “You betcha.”
With a bit of a smile and a realization that if I wanted to find out about the placement of Gouda in the middle of a cheese tray, I’d have to ask elsewhere.
And the words? Not really friendly at all, but delivered in a friendly manner:
“I’ve got a feeling that you have wax in your ears, a lot of wax.”

4 Replies to “Gouda and Wax”