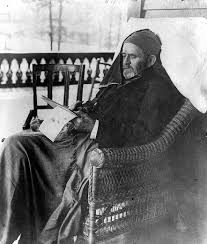 The great general developed throat cancer from those thousands of cigars, and the end wasn’t comfortable.

After his two terms as president, he and his family traveled the world for a year and a half. He and Julia lived their final years in New York City. Realizing he needed to provide financially for his family, he wrote articles on Civil War campaigns for New York magazines.

Diagnosed with throat cancer a year or more before he died, he kept it a secret from Julia as long as he could. We could imagine the pain and suffering he endured, not able to swallow without discomfort. 1885, July, he died with his family around him.

The top picture shows him on the porch of his New York home, writing daily to complete his memoirs and autobiography. He died a month after this photo was taken.

He was buried temporarily in a NYC grave, but a movement began to build a special and fitting burial site. Grant wouldn’t have wanted anything huge and overdone, but that’s what happened after his death. Money raised from around the country came from all segments of society, most noteworthy from soldiers who served under him or simply from those who respected him. The dollars, five dollars, and ten dollar bills added up.

The result can be seen below, Grant’s Tomb. He was entombed here in 1897, and years later Julia they laid next to him. My wife and I toured this site on a NYC tour, a massive granite building on the upper west side. Impressive site. The Hudson River is in the background.

Not make light of it, but the age-old question, “Who is buried in Grant’s Tomb?” The answer is: US Grant and his wife Julia. (for future reference) 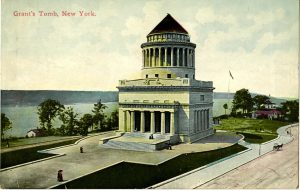 2 Replies to “Grant’s Later Years, His Death, and Grant’s Tomb”