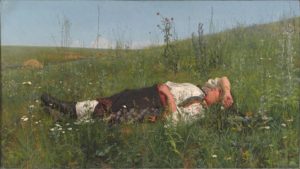 In an area south of Amery, south of Deer Park, a hired man died in the fall of 1947, his remains not found until the next spring. Details were printed in an article from the Amery newspaper, the Gazette I think, a short summary telling about the discovery of the bones and skull. This identified him positively as Edward Roach

. In my first book Growing Up in Amery I took that brief information and wrapped a fiction story around it.

Disappearance of Man in October Solved

About October 1, Edward Roach, 63, itinerant farmhand of the Cylon community, disappeared from his usual haunts and couldn’t be found despite a search made throughout the entire countryside.

Friday of last week, (April 23), one party happened onto a shoe containing the bones of a human foot in a dry-run emptying into the Willow River about a half mile south of Cylon. This was immediately reported to the St. Croix County sheriff who, with his deputies, combed the area.

Saturday they found more human remains and Sunday they found the skull so that positive identification could be made through teeth in the lower jaw. It was the remains of Edward Roach.

The area in which he was found was a familiar haunt for Roach who used to walk across that particular spot to a neighboring place. It is reported that he had a bad heart, and it is believed by the St. Croix County Coroner that he died of a heart attack, animals strewing the remains. No inquiry will be held.

If you want to read the article and story I came up with from this incident, please check Amazon for my book, and ebook, for only $1. Growing Up in Amery by Loren Elkin

No comments yet
death in field farmhand hired man mystery