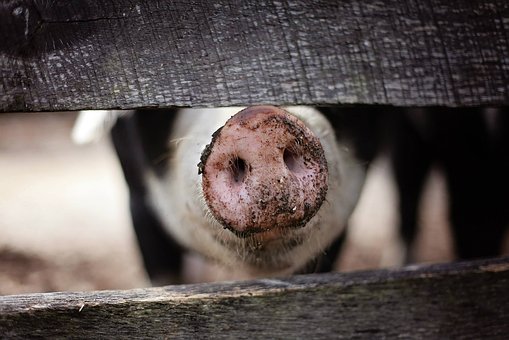 Slaughter memories. The screaming and squealing was like nothing I’d heard before. The frightened sounds of terror on B-grade horror movies couldn’t match the noise from that hog. The reluctant pig had to be moved across the barnyard to its final destiny, several men pulling a rope tied to its front leg. For an 8-year-old, it became a once in a lifetime experience.
We lived 3 miles west of Amery at this time. Our Holz neighbor to the north, basic farmers, invited Dad to this Saturday afternoon ritual, and he brought me along. Lots of men, a few kids, and lots of commotion.
The scalding barrel ready, all it needed was a dead pig. At first the scene was confusing, but the screaming, reluctant pig focused me in the direction of the men pulling the ropes. I asked Dad what was going on.

“They’ll kill her and then cut her up,” he told me. Blunt, serious. No follow-up questions from me as I watched the men pulling the pig by a rope attached to one front leg.
Dad covered my eyes at the time of the killing. Someone delivered a .22 shot between her eyes, the muffled pop ended the screaming and squealing. There in the dirt lay death, plain and simple.
Someone hoisted her to bleed out, and the hot water half barrel soon held the body. Dad helped with the scraping of the hide, maybe the reason he was asked to the event. After they gutted and cut her in half, the show was over. Dad and I got in the pick-up and drove the short distance home.
At home I settled in to watch some late afternoon TV shows and relax. The memory that is now 60 years old was stored permanently, the squeals recalled now as if it heard yesterday.

It brought to mind the different experiences country kids have from those living in an urban area.

2 Replies to “The Hog Slaughter at the Neighbor’s Farm”