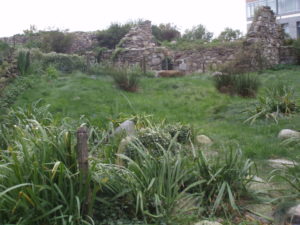 Tribute to the Irish. On a trip to New York City on our way to the World Trade Center site, we drove by this tribute to the Irish who emigrated to the US in the 19th century. This was built to look like a house in disrepair that dotted the landscape of Ireland, after so many came to the United States for a better life. Property such as houses, farms, and land was left unclaimed, hard or impossible to identify the rightful and legal owners. This scene to me had more impact than the World Trade Center site because of the millions of Irish who ventured to this country.

Currently 10% of the US population claims to be partially or totally Irish. They settled primarily on the east coast, in the larger cities, and did not pursue farming. The farms in Ireland were small and not like the larger farms in the America, so the Irish for the most part stayed urban.

One-quarter of the population in Boston, New York, Philadelphia, Buffalo, and Baltimore were Irish in 1850, later involved in politics as well as joining the fire departments and police force.

One quarter of the population of Boston, New York City, Philadelphia, Buffalo, and Baltimore were Irish in 1850. Later when they were more established and accepted, they became involved in politics as well as joining the fire departments and police force. During the Civil War units made up completely of Irish fought, primarily for the Union.

The potato in Ireland at the time of the famine provided most of the food for half the people and as high as all the diet of 40% of the people.

Famine caused by a potato blight in Ireland devastated the Irish people in the 1850s, and during that time 1.5 million migrated to America. A million died in the time from 1846 -51, and many were angered that the British government didn’t do more.

For a long time, the Irish were ridiculed and rejected, partly because they hadn’t learned English yet as well as being Roman Catholic in predominantly Protestant areas.