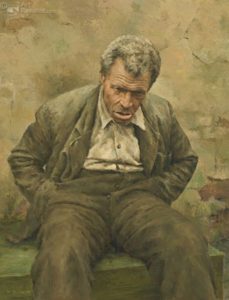 Lester worked at the Amery Hotel Cafe, and Saturday night he was busing tables in the hectic supper time. At one point he dropped a glass and it called attention to him, which of course he truly hates.
A group of kids from Clear Lake in the corner, their CL jackets on indicating they were athletes, teased and heckled him. When he came into their area they called him dumb, laughed at him, and made ape sounds. Amery high school kids at the counter heard them and didn’t appreciate this.
Four Amery boys walked to the corner table and called out the CL kids, “let’s take it outside.” A couple of the Amery boys were short but stocky, wrestlers who were tough as nails. They all went out and a few looked out the window. Lester kept working and wished this would be over, and the rest of the people finished their meals. In a short time the Amery kids came in, handed the waitress money from the CL kids for their meal, left on the table, and held something in their hands. Itr was a CL torn from one of the jackets, and in fact the C and L were separated. They handed this to Lester who didn’t know what to do with it. He took it back to the back room with him, but later they found it in the waste basket.
Of course Lester didn’t say anything, but he looked at the guys and nodded. Glad it was over, he kept working hard as he always did.

Often students at Amery High School wrote about Lester in their essays in English class. The English teachers learned about him and also learned that you kids could be crass and hurtful to others sometimes, but in this case they did what they could to understand Lester and show him the world wasn’t such a terrible place.

On the main page of this blog, if you want to know more about Lester, write his name in the search area, upper right, and  hit enter.

Just trying this out, click on this address to get to that Lester story: https://elkfarm.org/around-amery-lester-fixture/