My first typewriter was a treasure and an ally. When I first attended college at UW Superior after graduating from high school in 1966, my parents bought me a desktop full sized Royal typewriter, a heavy and solid model that didn’t slide around on the desk when I typed. It was a well designed machine, and the red/ black ribbon was a funny part of it because I seldom or never used the red. At the dorm in a hotel room that was converted to a student housing, I placed it on the solid desk and worked on it nightly. I got into the habit of typing notes that I wrote in lectures earlier that day. It worked well to do that–it made me review the ideas, clear up any confusing parts, and most importantly made it easier to study when studying for an exam.
The typewriter also served as a money-maker, typing papers for students on my floor and helping them with one pagers to longer reports. The going rate was a quarter a page so a ten pager brought in $2.50, a pretty good sum in the 60s. It provided spending money and allowed me to practice writing papers to make them presentable to become a finished project.

The manual typewriter became an electric typewriter the next year and for the rest of college. A Smith Corona that my parents purchased, bought in a typewriter store in downtown Minneapolis. That machine was quicker and the keys hit more firmly and non-varied, but the bugaboo all the time was the fact that making mistakes was not like today with word processors. But I didn’t know about them yet, and I just plugged along. It was great, of course, when I could concentrate on my own papers. Felt like I was in the driver’s seat. 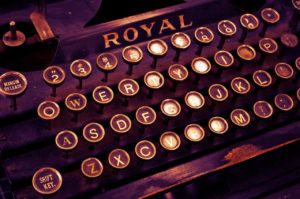