Margie and I spent a great afternoon together the first day out of third grade. Both of our birthdays were in May, and we were loaded with cash. She had $3 and I had $2. We decided to blow it at the drugstore in Amery.
School had just let out for the summer, and on Sunday evening I called her house. Sure enough, her big brother Jim answered, so all I said was, “Is Margie there?” He chuckled a little and I heard him yell her name.
She answered, and I’m no whiz on the phone. “Margie? Tomorrow, meet you by the lumberyard.” She said okay, and I hung up. Didn’t think I had to say anything else. The phone rang. It was Margie. “When?” Oh, yeah, we have to meet at a time. “Two?” She said okay, and I hung up.

We Meet in Amery

We met by the gas station across from Lamperts Lumber, and we both had books in our baskets. To the library first. Got a couple each from Mrs. Spinx. Friendly and so welcoming, this short and chubby lady made anyone feel good. A little small talk, questions from her about our summer, and then back onto our bikes.

To the counter at the drug store

To Danielson’s on the crossroads downtown. The friendly counter with a perfect view of Amery traffic, perfect. She bought a butterscotch sundae, and I started with a lime phosphate.
Phosphates came in a variety of flavors, with the soda lady (not a jerk) squirting strong flavor into the bottom of a glass and then adding charged water.
While she was eating her sundae, I ordered a cherry phosphate. While Diane made it, I bought a quarter pound of peanuts from the nut case. Spanish peanuts, delicious and great quantity for not much money.
The nut case held several kinds of nuts in a heated environment, the expensive mixed nuts without peanuts rotating on a round tray in the center. Heaven on earth for a nut lover. When I felt wealthy, I’d splurge on a quarter pound of cashews.
She bought a float– a square scoop of chocolate ice cream in a glass of Coke. Great with peanuts, laying the bag on the counter so she could reach them. My cherry phosphate arrived, and I laid a nickel on the counter.
We talked about summer plans, families, and our friends. Little eye contact, but it was a great feeling all over to sit there and talk with her. Swimming plans came up, and at that point she touched my hand that was already tan and told me she wishes she could tan like I did. What do I do with that compliment?

“Try harder this summer, I think you’ll do it.” I had no idea how a person could get better at tanning. But no one in our class could get darker than Bruce, that’s for sure.
She bought a pack of candy cigarettes for each of us. Pall Mall in the red box for me, Marlboro for her. These we could munch now and then smoke/ eat after supper.
“One more candy,” I told her. I chose Rolo, the chocolate with caramel inside. At the counter I opened it. Laying them out in the foil wrapper, I divided them evenly, almost. Secretly I gave her an extra Rolo.
That wasn’t like me, not sure why I did that.
We browsed the comics and magazines, talking and telling each other what we liked. Few people in at that time of the day, none of our friends came in. The store was ours except for the people that came through and walked to the pharmacy in back.
We sat down again, and she picked a piece of lint from my shoulder. Thinking I better do something in return, I told her she had a smudge of ice cream on the side of her mouth. Almost reached over and wiped it, but I caught myself. This talking to girls could be complicated.
No Chet’s Drug Store that day, we’d have to save it for some other time. We were stuffed, but Margie bought a ¼ pound of Virginia peanuts to take home. Another great choice, quantity a little more than quality.

As we got on our bikes, she surprised me. “You’re going to be in my future, Loren.”
I had no idea what that meant so I stayed silent. I couldn’t even say, “Huh?” She must have been thinking about that for awhile and it just came out. All I could do was belch quietly. That was quite a feast we just ate together.
In her future?
All I could think of was, “But aren’t you Catholic?” Still an idea in my mind and not on my lips.
We had lots of time to figure it out, both of us reaching that ripe age of 10.
We rode across the railroad tracks where I turned right to head back to my house three miles out.
We said goodbye, and she held out her hand so I could just touch her fingertips.
She rode up Keller Avenue to her house a half mile away.
What a way to start summer. 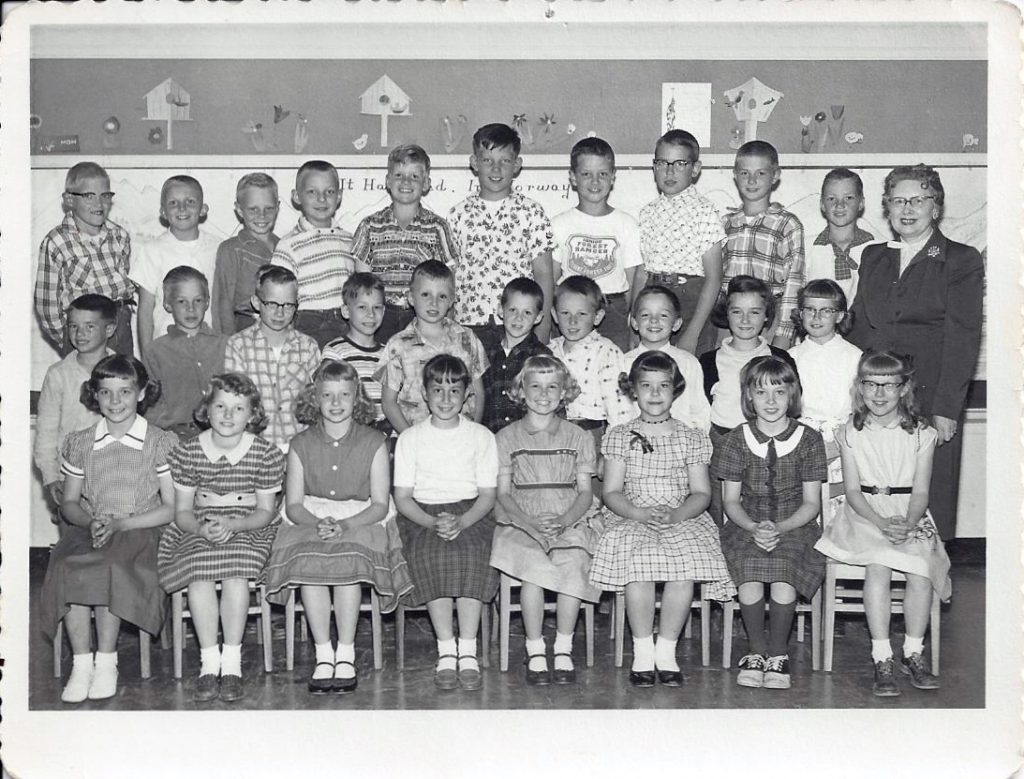 Mrs. Wilson’s 3rd grade. I’m the tall one in the back. It’s amazing to think of where these people are today, scattered to the winds in locations and occupations. That’s Margie front left.

MORE: In the search line at the top of the page, type in Margie and read another fun time we had together in the summer at the Amery Beach and elsewhere.