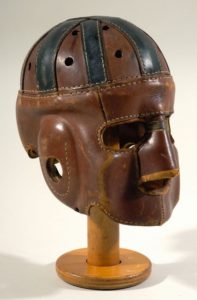 East of Amery a group of pre-7th graders gathered bravely to test weapons. We started a Mile High Club, not knowing that in the world outside of Amery it had a completely different meaning. Ours had nothing to do with airplanes or jets.

The summer before our 7th grade year at Amery, a few of us met to target practice with our 22 rifles and other guns. Even bows and arrows soon came into the mix.

We read on the box of 22 shells that their range was one mile. Hard to think of that little piece of lead going that far, but who were we to question it.

Planning for weeks before we finalized our venture, at the end of July we made it a reality. The Mile High Club.

Hay season meant cleared off fields, 2nd crop, and on the field south of the Gorres farm, we set it up. Kenrad brought a huge canvas his dad “found” at work, and we spread it out on the high point of the field. About 100 by 100 feet, a large area of the field covered in canvas.

About that time a girl joined our group, though we never intended to include girls. She brought cookies and a great sense of humor, and also watched more than talked. Youlanda, a Mexican girl, stayed at the Moochie farm south of our landing pad. Funny and curious, she talked with an international accent. That was new to us little Norwegians.

She joined the 5 of us, and so we began. First we stood in the middle of the canvas and shot straight up. The bb gun, then a pellet gun. Windless days, quiet July afternoons, and we heard the bb or pellet land. Bud brought a bow and arrows, so he shot straight up. Most of the group followed the arrow to see where it was headed, but a couple of us didn’t look and simply stood still with arms close to their sides. Terry and Kenrad, if I remember right.

Half the time the arrow would hit the canvas. Youlanda watched, and when the arrow went far astray, she ran to get it.

The 22 rifle was next, actually 3 of them. Someone would shoot straight up, the other Terry shot first. The wind picked up so we called it a day, planning to meet later in the week. The command went out, though: bring helmets next time, anything you can use for a helmet.

Second Meeting of the Club

After a few phone calls to organize, we met the next Friday on a calm day. My helmet was a WW I helmet from my Uncle Oscar who had fought in Europe. Kenrad brought a German mock-up helmet, Terry 1 brought a WW II American helmet, and Bud found that helmet you see at the top of this post. Someone had made it as a joke, a leather football helmet. Terry 2 hauled out a cast iron frying pan. Youlanda brought a diving helmet. We all gathered around, never seeing a diving helmet in person. Heavy but thick metal, we called her the deep sea diver. Of all of us, she wore the best protection. She never told us where she found it, but it was a lustery copper color, and it fit her perfectly. 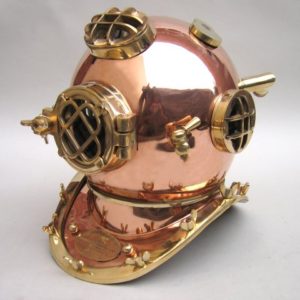 We began with arrows, but soon we were shooting 22 bullets straight up. Perfectly quiet, ideal conditions, and we heard a few but not most shots. When we recovered the lead, it was still in the shape it was when it left the rifle. Only one bullet became near-lethal, and that bullet hit the diving helmet square on top and dented it. That was a thrill for us all, but especially for new friend Youlanda.

The only other shooting was a few days later when someone brought a 410 shotgun. The small bbs came down, sprinkling the canvas. We got a kick out of that.

That’s it for our Mile High Club. We didn’t meet that fall or next summer.

For a time that summer, we kept busy with our grand mile high experiment. Growing Up in Amery. 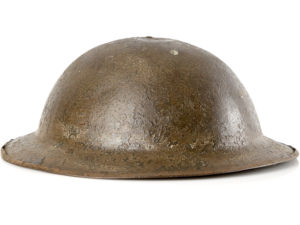 Please sign up on the right side with your email address and name. If you don’t want to give your last name, simply place an X there. Your first name would be appreciated, you’ll get a few other items of writing and can opt out at any time. Loren X