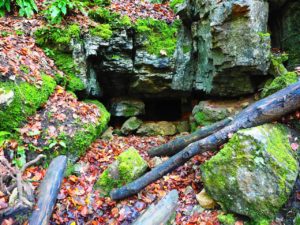 A bear’s den? Not unless bears used campfires and slept on blankets. It was a small cave, but just about right for miniature beings.

Running in the pasture in back of our house west of Amery, I spotted an opening at the base of a rock formation. A cave opening. The merry month of May, a lucious time to run off my energy.

Before, in the summer, the grass covered the entryway so the mouth was out of sight.

Back to the house to eat lunch, drink a little Kool Aid, and find a flashlight that worked.

Before too long I was on my knees peering in. I moved a couple of snake skins from the front. Ugh. Glad I brought the flashlight. Inside, a long, low-ceilinged chamber that, thankfully, became roomier as I neared the back end. Smelling like wet soil, there was also a hint of campfire smoke odor.

In the far end I saw a shaft of light, focused on a pile of leaves and even a torn blanket mixed in. A primitive, very primitive, bed. Turning my head and looking up at the source of the light, a bitty opening appeared. I saw campfire remains below it, ideal venting for someone’s warming fire. Wood on the wall on the right, ready for another small fire. Not a bear, I guessed. Can you tell I’m a pretty sharp guy.

The 3-foot high ceiling made it impossible for me to stand, but I saw footprints all around me. Someone had stood here lately.

More on this later.