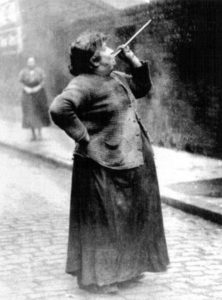 Peashooter as a job. Waking up shift workers in industrial England became a profession, a way to earn money. Using a variety of methods, they woke up people who had contracted with the “wakers”. Early attempts at waking people up meant knocking on room doors, but neighbors complained about the noise in the hallway. The solution was to rap or tap windows of the customers. My first inkling that this was really a thing was that old photo of the lady with the peashooter.

Until the 1970s in some areas, many workers were woken by the sound of a tap at their bedroom window. On the street outside, walking to their next customer’s house, would be a figure wielding a long stick.
The “knocker upper” was a common sight in Britain, particularly in the northern mill towns, where people worked shifts, or in London where dockers kept unusual hours, ruled as they were by the inconstant tides.
“They used to come down the street with their big, long poles,” remembers Paul Stafford, a 59-year-old artist who was raised above a shop in Oldham. 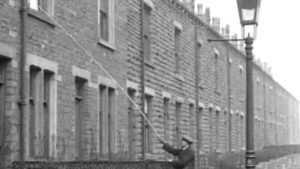 “I would sleep with my brother in the back room upstairs and my parents slept in the front.
“[The knocker upper] wouldn’t hang around either, just three or four taps and then he’d be off. We never heard it in the back, though it used to wake my father in the front.”
While the standard implement was a long fishing rod-like stick, other methods were employed, such as soft hammers, rattles and even pea shooters. The next question was, who woke up the “wakers” so they’d get out and do their jobs on time? The invention of the alarm clock put an end to this practice.

A Word from Loren

Sometimes I kid and sometimes I stretch the truth to make a fun story, but this history is true. In fact, look this up using any of the key terms above.

And just keep this in mind: I will never say I’m telling the truth when I’m not telling it. If I say it’s true, it is to the best of my knowledge. Usually if it’s something I’ve made up, I often write: This just might be a story  (and in that case it is). Hoping that’s clear, dear reader. 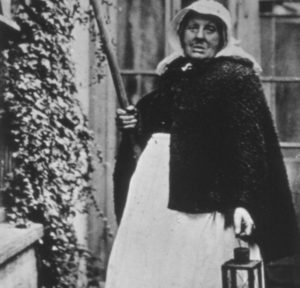