The lucious and ubiquitous sandwich with anything you choose to put between two slices of bread, or on one slice if you enjoy open-faced sandwiches as I saw in Norway: nearly all delicious.

Britain‘s “biggest contribution to gastronomy” (did you know that?)

Sandwiches have been a basic a part of my life, always easy to make, so compact and satisfying. Peanut butter and jelly was often my favorite, but so were others. I consider the hamburger a sandwich, and though we had them at home, they became a fine treat when our family or I ate out in cafes. The hamburger at Nordahl’s Cafe on Birch in Amery with Johnny Johnson’s mom frying them, hard to beat. They were about a quarter at that time, and cheeseburgers weren’t that common. The hamburgers at A and W were fine, as well as at the Amery Hotel.

Hamburgers at Wayne’s Café, once called Owly’s, cost a little more but were of higher quality. I remember them coming on a little better platter. This late night cafe became the place to eat after football and basketball games. Hamburger and fries were 60 cents, so with a cherry 7-Up, it left enough for a generous dime, or two, tip for Karen or her mom, Eleanor.

Bacon, lettuce, and tomato works of art, pictured below. Always a treat in the summer when tomatoes were everywhere. This taste combination has no equal, though close to it is a taco. (not a sandwich).

There’s a memory I carry with me about the first McDonald burger I bought on Snelling Avenue on the way to the MN State Fair. About 15 cents and though they were pretty bready, they tasted great.

Once summer when I worked on an Apple River project, my mom made a sandwich for me, and she didn’t tell me about it. What did she put in it? Cream cheese and walnuts. Uff da, did I quickly reject that and didn’t eat that day. Of course young and immature teen that I was, I should have been making my own sandwiches that morning. Today I would heartily enjoy that type of sandwich, but not then.

When I packed for my twice a year school sack lunch week as I wrote about before, it would often be p and j. (Refer to the blog post with the painting of Karen Appleton’s about a month ago). P and J was the standard and a little fellow like me would have a hard time screwing it up. Sometimes lunch meat.

Said to be named after John Montagu, 4th Earl of Sandwich (1718-1792), who once spent twenty-four hours at the gaming-table without other refreshment than some slices of cold beef placed between slices of toast. This account of the origin of the word is given by Grosley [in a publication titled] Londres (1770).

A sandwich is a food typically consisting of vegetables, sliced cheese or meat, placed on or between slices of bread, or more generally any dish wherein two or more pieces of bread serve as a container or wrapper for another food type. The sandwich began as a portable finger food in the Western world, though over time it has become prevalent worldwide. Thanks Wikapedia.

Check the work of Karen Appleton for paintings and prints:  www.karenappleton.com 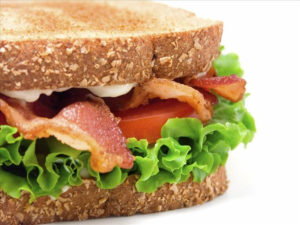