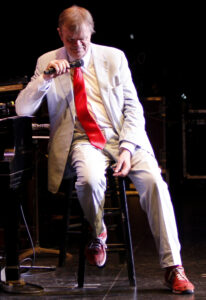 The lady next to me at the Keillor show had to be one of those church basement women. There with her husband, they didn’t laugh that much or talk to each other. I’m guessing they did enjoy it.

Early and before the storyteller came out, I asked her if she’s ever seen him in person before. She said yes but I could tell she wasn’t going to say much more. My next suspicion was that her husband was pinching her to keep her from talking, or he might have leaned into her and said, “This guy sounds like he’s from Wisconsin.”

The tall man with the stories and insights came out, sung a little, shared his philosophy, and appeared to enjoy keeping the attention of this crowd who had come to  see him at the Paradise Theater in Faribault, MN.

The original show scheduled for the end of January was snowed out, and he wanted to make up for that absence. He talked about his wife who at that moment was in Hayward, WI, at a family wedding and probably dancing the night away with some young French man.

My favorite line of the night came when he was asked what he thinks about the in-laws.

“I enjoy them, no problem. But I enjoy them ONE at a time.” Lots of laughter as it dawned on the audience what he meant, and that it applied to so many of us. My in-laws are wonderful, but I, too, enjoy them one on one rather than as part of a crowd.

The lady next to me, I’ll call her Edith, didn’t say much to her husband or, of course, not to me. Chalk it up, I thought. I’m not one to force myself on anyone, and I fully understand the feeling.

The scene changed, though, when Keillor began singing a familiar hymn and invited us, dared us, to sing along. Next to me came a heavenly sound.

Edith had the voice of a Lutheran angel.

The lady is in the choir, I’m guessing she’s the director.

My voice wasn’t like hers but it felt so comforting to sing this hymn.

“Whatever my lot, thou hast taught me to say”

Throughout the theater, the calm voices of 250 singers created a beautiful chorus.

Even into the 2nd verse I listened to Edith as much as to Keillor and the entire audience.

It meant much to me, this song, because I learned the background of this hymn, often sung at funerals and serious services.

The author was a minister and in the 1870s had survived and dealt with the Chicago fire. Year later he learned that nearly his entire family died in an Atlantic shipwreck. His wife survived, his daughters didn’t. (if I have that wrong, I’ll correct it)

For us, that song came toward the end of the show. In the nearly 2 hours the laughter, the crying, the deep thinking , it all  happened as part of Keillor’s insight in human behavior.

Edith and I didn’t talk at the end either, but as I stretched and slowly worked out the kinks as I  shuffled to the lobby, my mind created an inventory of what I’d remember the most about the evening.

Right up there was sitting next to the angel, Edith.