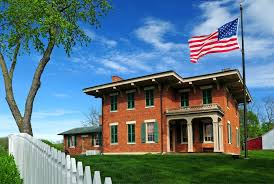 After the Civil War the city of Galena gave this beautiful house to Grant and his family as a way to show appreciation for his Civil War leadership.

Grant had worked with and for his father in a leather goods shop before the war, but after the war settled here for a few years. Tours of this house brought Grant to life, telling of family activities and other details about Grant and his wife Julia.

The tour guide told us that shipments of cigars arrived at Galena on a regular basis, a show of appreciation from citizens and his former Union soldiers for what he did. Grant was often pictured with a cigar, and that turned out to be fatal and caused his death in the 1880s. More about that in another post.

The other interesting fact was that his wife Julia, in all photographs of the family or of the couple, turned her head to one side or the other. You can see that in the photograph below. The reason? She was severely cross-eyed and felt shame and embarrassment about her condition. Thus, the sideways look.

More in another post, their later years in New York City and Grant writing his autobiography. 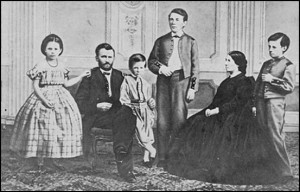