Nancy suggested that the newly closed café in Amery, Ida Mae’s, would be a possible spot to start the Weigh Station.
“This group could have the place opened before Halloween, maybe much earlier.”
The bathroom question came up. What if visits there would mean the diner wouldn’t gain any weight.
Becky had an answer ready, from experiences at places that already opened.
“Each customer is allowed one bathroom visit, and this comes in the form of a ticket.” She paused. “Any more visits will cost the person money. That figure has yet to be determined.”
Lots of confused looks, lots of small conversations among the possible investors, and a lot of thinking to be done. This was such a new idea.
Each attendee signed a form to receive more information besides the folder each received at the beginning.
More to come on this, lots of decisions to be mulled over. 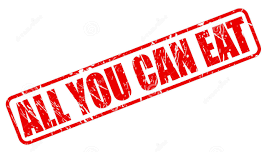 —————–
A couple side notes—In talking to people about this concept, Pat at church today mentioned a group of young nephews at a family Thanksgiving dinner a few years ago. One of the kids challenged the others to a contest. They weighed every competitor before the main Thanksgiving meal, and after the meal weighed each person again. Not sure what the totals or results were, but that was a contest they’ll never forget.
Arlen wrote that he’s seen all-you-can-eat restaurants where a kid is weighed before the meal. The 35 pound kid would pay less than a 100 pound kid, both under a set age, like 12 years old.
He also ate at a diner where they weighed the food a person chose. After the meal the diner would pay for the pounds and ounces consumed.

One Reply to “Weighing Diners in Amery, Part 2”