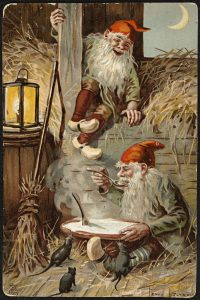 Five bodies lay on the porch, four of them staring into the field beyond the barn. Emma, the littlest, lay on her back with her mouth open, catching snowflakes. A thick blanket under them kept them warm. The  Nordhus farm on Fjelberg Island.
Snowing, barely. Christmas eve.
Aunt Marianne, the largest of these humans, whispered, alerting the kids to the spooky little figures walking across the hayfield.
“Look, on the left, there’s a family with 2 big people and their child.”
Petra and Erica said they saw them, but Anders spotted another pair on the right, walking up the driveway.
At that moment Marianne noticed Emma on her back, catching flakes of snow. “Emma, watch the field. You’re missing it all.”
Marianne felt a snowball hit her on her back. Looking up the hill, she saw a nisse smiling at her. The humans were discovered, but the kids didn’t know that. Only Marianne knew the nisse knew. 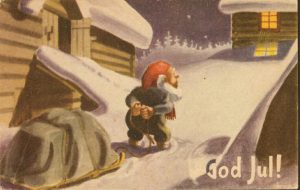 Carrying goodies in backpacks and on sleds, they entered the barnyard and the barn at different entryways. Walking past Shep the collie in his cozy doghouse, the nisse threw pieces of something to him, probably meat, and spoke to Shep. The language, on this night, understood well by both nisse and canine.
With no other gnomes in sight, Marianne announced that everyone get up for the next phase.
“We’ll see what they’re doing in the barn,” she told them.
They walked to an entry door that none of the nisse had used. “No talking, none.”
The kids, scared and anxious, felt their hearts beat like those of little mice. One Reply to “Yule Nisse Gather at a Fjelberg Barn-I”